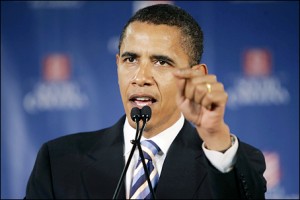 Since Scott Brown’s win in the Massachusetts Senate race broke the Democrats’ filibuster-proof Senate majority, President Obama’s health care bill has been reeling.  In an attempt to revive his health care agenda, Obama has invited both Democratic and Republican leaders to discuss possible compromises in a televised gathering on February 25th.

The Associated Press reports that “Obama’s move came amid widespread complaints that efforts so far by him and his Democratic allies in Congress have been too partisan and secretive.”  Backlash stems from closed door deals that gave kickbacks to secure favorable votes, especially glaring since Obama initially suggested that health care debates should be televised on C-SPAN.

As the AP reports, “The meeting’s prospects for success are far from clear. GOP leaders demanded Sunday that Democrats start from scratch, and White House aides said Obama had no plans to do so.”

Many liberal groups want Congress to employ their lawmaking muscle to enact health care reform by reconciliation, a measure that can bypass Republican support.  But while President Obama has remained adamant about passing a health care bill similar to what passed in the House and Senate, lately he’s shown more willingness to consider Republican input.  In an interview with CBS’s Katie Couric, Obama said that he wants to look at the best ideas from both parties and arrive at some agreements.

But such agreements won’t come easily.  The White House maintains that “Obama does not intend to restart the health care legislative process,” whereas Senate Minority Leader Mitch McConnell speaks for many Republicans when he says that “if we are to reach a bipartisan consensus, the White House can start by shelving the current health spending bill.”