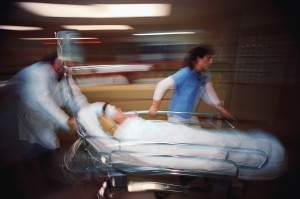 Throughout the administration’s posturing for the benefits of health care reform, a common theme was that the new legislation will allow uninsured individuals to seek less costly and more accessibly care, rather than turning to emergency rooms.  But a recent study by the National Center for Policy Analysis finds that emergency room costs will actually increase under the new health reform legislation.  According to the NCPA:

The recently enacted reforms will eventually add more than 30 million people to health insurance rosters, but no measures are being taken to expand the amount of doctors, nurses and medical support staff.  Naturally, this will lead to a severe imbalance in the demand for health care and the available supply.  Since it will be difficult for newly insured patients to see overworked doctors, emergency rooms will be the only place they can receive care.  Another consideration is that approximately half of the newly insured are expected to enroll in Medicaid.  Since many private practitioners do not accept Medicaid patients, the patients will again be forced to seek care at emergency rooms.

So rather than decrease our nation’s dependence on costly emergency room care, health reform legislation is likely to have the opposite effect.  The NCPA projects that “insuring between 32 million and 34 million additional people will generate between 848,000 and 901,000 additional emergency room visits every year.”  This is just another example of the negative impact ObamaCare may have on our already-overburdened health care system and economy.