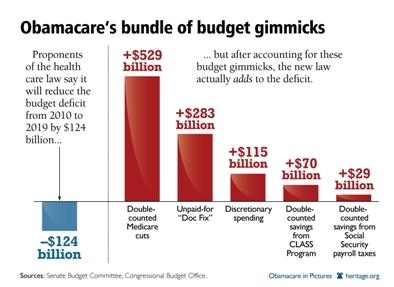 As more conservatives flood into Congress next year, many are determined to repeal the health care bill, which may be the only way to get our federal deficits under control.  Obama’s administration continues to preach the positives of the bill, despite a general consensus that it’s too expensive and actually prohibits consumers from receiving affordable health insurance in Texas and across the country.

As the Heritage Foundation notes, much of the issue lies with the misinformation distributed by the government. For example, the former Director of the Office of Management and Budget under President Obama claims that leaving the legislation intact will cut costs, but the numbers just don’t add up.  A recent NY Times article claims that ObamaCare will cut the federal deficit and reduce Medicare spending.  But what’s left out is that, although spending on Medicare will be reduced by $575 billion over the next decade, the savings would be used to offset spending on new programs.  So in reality, no money is saved.

And to reduce Medicare spending, the new law plans to cut payments to providers, which only acts to decrease the number of doctors willing to see Medicare patients. That doesn’t save costs; it merely pushes the costs elsewhere. The administration also plans to make Medicare more efficient – which they say will reduce costs. But when’s the last time the government ever made something more efficient?  Efforts to increase efficiency from the top down usually result in price controls, which only disrupt the natural market forces.

Hopefully the newcomers to Congress will help to set our health care–and as a result, our economy–on the right track by addressing the irresponsible health care legislation and replacing it with reforms that actually work to lower costs. The Heritage Foundation sums up the issue with some clear thoughts:

The new law will be ineffective at increasing efficiency…The only way for the new Congress to eke out savings from health care is to repeal Obamacare and replace it with bottom-up, consumer-driven approach to reform.