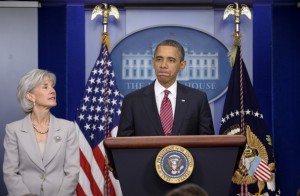 If you’ve been watching the news lately, you’ve probably heard that the Health and Human Services Department enacted a measure requiring nearly all insurance plans to cover contraceptive and sterilization methods, including the morning-after pill.

There are certain exceptions for religious groups, but in this case, the government outlined what constitutes a religious group. According to The Wall Street Journal, “the HHS chose to draw the rule’s conscience exceptions for ‘religious employers’ so narrowly that they will not be extended to religious charities, universities, schools, hospitals, soup kitchens, homeless shelters and other institutions that oppose contraception as a matter of religious belief.”

For most, this isn’t a birth control issue. It’s an issue of the government overstepping its bounds and placing mandates on private organizations – something we’ve become too accustomed to under Obama’s presidency. Most health insurance companies and employers already offer coverage for contraceptives and birth control pills. They do this of their own volition. But some organizations, including certain religious groups and employers, choose not to cover birth control. As private organizations, this is their right and is covered under the First Amendment. You know – the most important amendment to our nation’s Constitution.

The over-arching reach of the Affordable Care Act has already instated compulsory coverage mandates on individuals and profit limits on health insurance companies. The abuse of power and infringement on personal liberties is a slippery slope. Where will it end? The WSJ sums up its thoughts with this –

“When politics determines who can or should receive what benefits, and who pays what for it, government will use its force to dictate the outcomes that it wants—either for reasons of cost, or to promote its values, which in this case means that “women’s health” trumps religious conscience… Religious liberty won’t be protected from the entitlement state until ObamaCare is repealed.”

Please Fill Out the Form Below