This week, there have been a couple interesting news items discussing why people buy insurance for relatively low cost, predictable health expenditures. Examples of such expenditures include routine prescription drugs, regular physician visits and contraceptives. Comprehensive – and usually expensive – health plans may cover these costs, but at what cost to you? Friend of the program, John Goodman, believes that buying insurance for items you could easily afford to pay out of pocket is, simply put, throwing money away.

There are a variety of options for minimizing your health insurance costs. In this case, we’re mostly talking about individual health insurance plans, rather than employer-subsidized plans. For the average consumer, the most affordable health insurance option usually includes a higher deductible with a low monthly premium. In such an instance, the insured pays out-of-pocket for routine health expenses, like prescription drugs and doctor visits. If you’re fairly healthy, then your out-of-pocket expenses likely won’t equal the extra amount you’d pay in premiums if you had a low deductible plan. John Goodman provides this example – 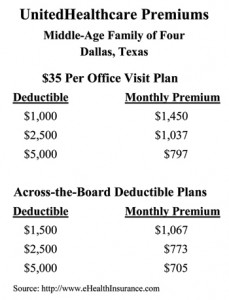 In the first example, the family of four assumes an extra $4,000 dollars of risk by choosing the $5,000 deductible versus the $1,000 deductible. But over the course of one year, that same family saves nearly $8,000 in monthly premiums. Just by doing some simple math, it’s obvious that our fictitious family would be better off with the higher deductible. Even if they use their entire deductible, they still save a few thousand dollars over the course of one year.

Obviously no single plan is perfect for everyone, and savings for individuals may be less drastic than savings for families. But the next time you shop for health insurance, consider a high deductible health plan. More often than not, the money you save on premiums makes up for the extra out-of-pocket costs.